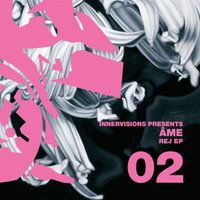 First up is a track that came out at the back end of last year and has taken a while to reach these ears at least. Unlike so many tracks that get massive hype prior to their release and fail to live up to the high expectations set for them, this track has done the opposite and earned it’s reputation through word of mouth around it’s deep techno throb and beautiful synths. Anyhow, rather than rattling on endlessly about the virtues of this fine piece of music (especially as you may have read about them several months ago if you were more on the ball with this release that I was), I’ll just bung the track up and let you hear its greatness for yourself.

Perhaps I missed it because it came out on Sonar Kollektiv, a label I don’t normally check but based on that form I think I may have to give it some closer inspection!

I came across the track on the Fabric 27 CD mixed by Matthew Dear (also available above), a tasty workout of tough minimal techno that I’m sure my neighbours just love when I play it on high volume ;o). 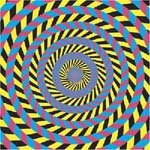 Matthew Dear’s been getting quite a lot of press over the last year or two and has some quality releases under his belt in his own name and various others, including his darker Audion guise. The track below is the opener from his excellent Audion – Suckfish LP last year and should give anyone new to his stuff a taster of the sound.

I recommend digging around and seeing what else he has to offer as well as how others approach remixing his work including Roman Flugel’s mighty take on ‘Just F*cking’.

Check out his websites too with the Audion one in particular offering a couple of head-wrecking visual downloads. 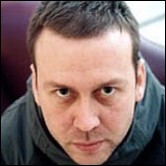 Not exactly the first place that springs to mind when you’re trying to think of cities that produce fine quality music but there’s exceptions to nearly every rule and Mark Stewart AKA Claro Intelecto is the one as far as this post's concerned. He’s got a new 12" out this week which although in my opinion isn’t his best work it’s worth buying nonetheless, especially if you’re record collection doesn’t contain some of his previous releases. In fact, if you aren’t aware of his previous form then you’ve been missing out on some of the finest electronic gems of recent years!

It all kicked of with the Peace of Mind EP on Ai Records, an absolute belter of a 12 with all 4 tracks being of the highest quality. The two standout tunes for me are the gorgeous electronica of ‘Peace of Mind (Electrosoul)’ and the pure electro filth of ‘Tone’; posted below for your listening pleasure.

Now if that scared you a little and you like your electronics chilled then I suggest donning your finest trainspotting tweeds and going on a hunt for the highly limited ‘Lacan / Episode' release on Modern Love as the deep techno minimalism of Lacan will be sure not to disappoint.

Basically, all of this guy’s stuff is worth checking out and he’s one of the few artists I’m happy to shell out on without listening to the tracks beforehand so I suggest you raid your piggy banks and go out and get some.

The last track I’ll leave you with is another rare release by him, this time one which came out on a free CD to mark the hundredth release of De:Bug magazine; a fine publication although I guess most of our readers will find it easier to digest when they start doing an English version (here’s hoping!)

Wax On, Wax Off 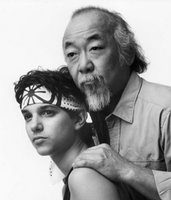 Fujiya & Miyagi (Pictured) Released their new album last week. 'Transparent Things' is a collection of their three 10" releases on Tirk Records, plus three new tracks. I haven't heard the full album as yet, but I can bet it will be full of Krautrock goodness in a Can, Neu!, Faust kinda way. Their other releases appeared on the now defunct label Massive Advance, including this excellent minimal remix from Two Lone Swordsmen, and we all know how big a fan Mr Weatherall is of early 70's German electronic, experimental Rock.

This is wonderfully epic and addictive mystic rock complete with all the suspended electro beats and likes of Can’s ‘yoo doo right’, Kraftwerk and other well-paced krautrock timeless numbers. Listen herein for intermittent sounds of a squeaky door (or perhaps it is a loose window or a lost bird…), evocatively played stringed instruments, and unassuming lyrics whilst the drummer sheds a few pounds toiling away admirably throughout. What stamina (or is it a machine?) Collarbone is a rather funky mantra on the art of tying shoe-laces, avoiding ankle injuries, and learning ones anatomy. Intimate and also educational, with a capital E for enjoyment. Think i’ll play it to the sixth grade tomorrow, bugger drawing ellipses! 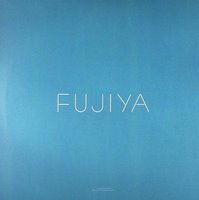 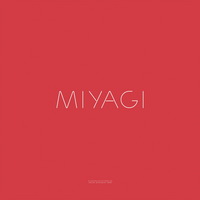 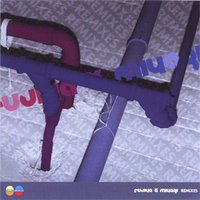 Findout their real identities from fujiya-miyagi.co.uk

The Boards Are Back In Town 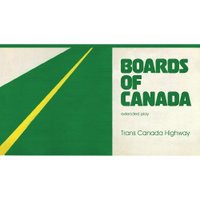 Boards of Canada are releasing a new EP titled 'Trans Canada Highway' on the 29th May, Containing 3 brand new tracks plus Dayvan Cowboy taken from their last irresistible album 'The Campfire Headphase'. Also included is a new remix of Dayvan Cowboy by Odd Nosdam. Anticipation is of course always sky high when new BOC music is released, mostly because they themselves are such an enigma, rarely giving interviews and shying away from the limelight in their Scottish retreat.

The two tracks here certainly live up to their ethereal best, containing few suprises but always sounding uniquely atmospheric in their classic style. 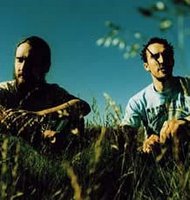 Boards of Canada - Left Side Drive

You can also pre-order the EP at Warpmart

Back by popular demand. A brand new unreleased track by Lindstrom.
For those of you who did not get it last time I posted this, be quick because it will not be here for long. Enjoy your breakfast.

This is Only a Test 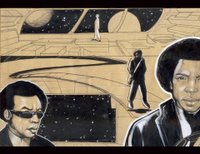 Regular visitors to this blog may have noticed that the frequency of The Langer's posts have been somewhat erratic of late. For this reason he's decided to enlist the help of some friends.

I don't know much about the Foremost Poets apart from that the guy's real name is Johnny Dangerous (allegedly!). I've not heard much of his other stuff either but this track is a tasty slice of dirty twisted house from quite a few years back that originally came out on Soundmen on Wax records and was later re-released on a couple of other labels including Junior London. You can buy this track in one of it's many guises at Juno.

Around The World, Around The... 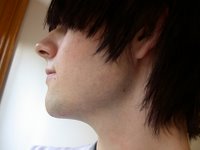 A very quick post today, seems like I never get the time these days. Inspired by a track posted on Oh My Gosh, I decided to purchase this extremely good techno compilation on Cologne based label Traum Schallplatten. It is an exellent example of the minimal electronic sound coming out of Germany at the moment, however the this comp has an international feel (hence the name Interkontinental 5) with artists from England, Austria, Belgium, Portugal, Canada and of course Deutchland. 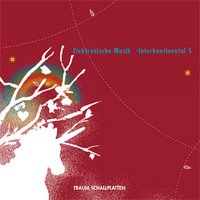 This track is a prime example of the so called 'minimal' techno coming out of Germany (strange how the minimal sound doesn't actually sound that minimal anymore) However it has been produced by a Canadian by the name of Jesse Somfay. check out more info on his website www.abiotic.net/js/ This track gets off to the usual bleepy start but but really starts to get hypnotic and takes off after an epic breakdown in the middle (Its almost the new Trance!)

And Did We Mention.... The French Invasion! 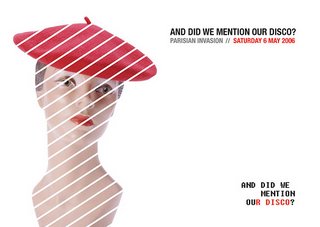 And Did We Mention Our Disco? Has been one of the consistantly best small club nights over the last 3 years. Unfortunately Our disco got pushed out from its weekly Friday nights down at Plastic People by the owners of the club wanting to try something different. (Why get rid of one of the most fresh and eclectic nights, which attracts huge crowds every weekend to try something different?) The phrase "If it ain't broke... " springs to mind.

Anyway left in the club wilderness, with no permanent home Our Disco now does one-off parties, the last great one was a free bash at London's Canvas, which was mind blowing. So when I heard about the next one this Saturday featuring Justice, Mr Oizo, SebastiAn, Feadz, Kavinsky et al, I nearly creamed my shorts with excitment! Go to Our Disco for ticket info.

And what a line-up they have extracted from across the channel. Everyone thought the French filtered disco sound had run its course a few years back, but you can guarantee whenever you write-off a scene it is bound to rear its ugly head up again and bite you in the ass. The new sound has taken the old filtered sound, turned it up to 11 and put it through the electro shreader to make a sound so filthy it will strip the paint off walls at 50 yards.

It is with this in mind I have decided once more to honour the new masters of filthy electro Justice. Their new Waters of Nazareth Part 2 EP is out today with new mixes by Erol Alkan, Justice themselves and DJ Funk. However it is for their remixes that they have gained their awesome reputation, so it is with great pleasure that below is a selection of their best. From Death From Above 1979, Soulwax, Vicarious Bliss, Daft Punk, Franz Ferdinand, through to the still magnificent (it doesn't matter how many times you hear it!) Justice vs Simian - Never Be Alone (We Are Your Friends), which has also been re-released. 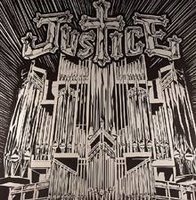 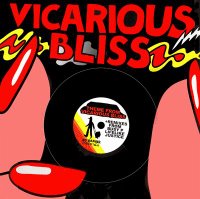 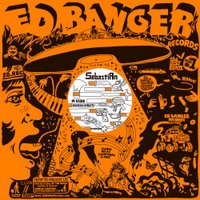 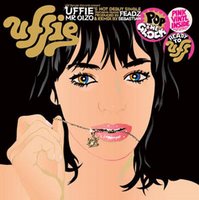 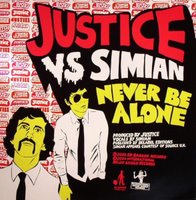 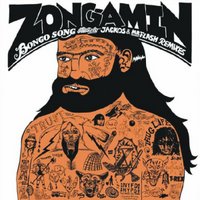 Special mention has to go to Ed Banger records and to So_Me the illustrator responsible for some of the best artwork to grace record sleeves in recent years.