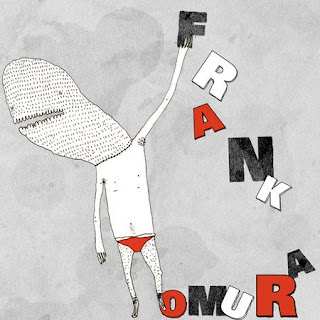 Frank Omura's debut release, 'Unshaven Face EP', recently came out on Moodgadget and delivers five tracks of refreshing electronic goodness. Much like the varied mix of styles exhibited by Moodgadget's artist roster, each of the tracks on the EP is different from the next with everything from experimental electronica and soundtrack style atmospherics to dancefloor-focused techno and electro all being present. The EP contains nigh on enough ideas for a whole album but the ever changing sounds are cohesive and the heavy use of effects adds depth; resulting in a captivating array of sonic delights. 'Day Colliders' is probably my favourite cut from the EP but as the artist and label are kind enough to offer a free track for download it's only fair to post this one.

As with most of Moodgadget's releases, the EP is only available digitally and you can pick up it up from most of the big players including Boomkat.

EDIT: Moodgadget has got in touch and kindly given permission for us to put 'Day Colliders' up too - enjoy! 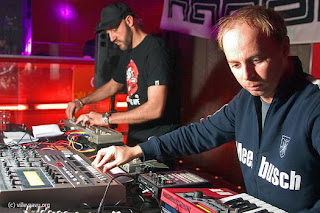 During my constant quest for new and exciting music it's often nice to go back and hear some slightly older classics and in recent months Hardfloor's contribution to the 'Tales of the Unexpected' mix series has satisfied my cravings on a few such occasions. The acid veterans decided to take a slightly different approach with the project by positioning the album as a continuous mix spread over two CDs. From the listener's perspective all this really means is that the last track on the first disc is the first on the second one and due to a couple of badly placed vocal tracks on CD1, it's CD2 that's been the air time on my stereo. As was the norm a few years back there's a healthy dose of big basslines on offer as well as some nice old school loopy minimalism and some no nonsense electro. Unlike many mix CDs, the one thing that's missing is a liberal smattering of the artist's own tracks and in fact only one gets a mention and as you'd expect from these guys it's drenched in classic 303 squelch. A couple of tracks from the release feature below and it also seemed fitting to put up the track that cemented Hardfloor's place in electronic music's history.

Buy Tales of The Unexpected 3 at Juno.

The Unabombers are releasing the third volume of their 'Electric Chair - Saved My Life' compilation series in mid October. Celebrating 13 years of their now legendary defunct club in Manchester, the 'Electric Chair R.I.P EP.' gathers together three eclectic tunes which defined the sound at The Chair.

Tracks include the Paradise Garage anthem 'Stand on the Word' by the Joubert Singers. 'Black Men United' by Shut Up And Dance and my personal favourite 'Like Some Dream (I Can't Stop Dreaming)' by Daniel Wang, a Sleeque sampling, 4/4 groover which sounds as good today as it did in 1993.

The 'Electric Chair R.I.P EP.' is out on Oct 13th with the compilation to follow mid October.

Daniel Wang - Like Some Dream (I Can't Stop Dreaming) // Tirk

Also as a bonus, The Unabombers have remixed the latest release from Crazy P. They have beefed up the production to create a very solid driving dark House backing which complements the Moloko-like pop vocals.

Their album 'Stop, Space, Return' is released on October 20th

And finally a Breakbeat Rave classic has been given the Bangin' Electro House treatment from Lee Coombs. A floor filler and no mistake, however you will never top the original in my opinion.