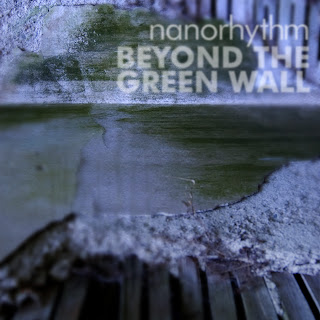 OK, so the fact that we officially closed this blog in 2010 serves as some excuse for not dropping by here to give an update on things sooner but this post is a little overdue so as I'm here now, I'll cover off a couple of bits at once.

As mentioned previously, my main musical focus after quitting blogging was always intended to be making music of my own and last year finally saw the official release of some my music - hoorah! My debut EP, Beyond The Green Wall, came out as a digital release on Broken20 at the end of November and is available to buy via Boomkat and direct from the label. The EP contains two tracks from me plus two remixes from Broken20 label boss TVO and another from Spatial. It picked up nice reviews from Boomkat, who also put it on their 'recommendations list, and Bleep 43. Getting such nice comments from both of these camps made me really happy as I hold both organisations in high regard and have long used their views as a staring point for hunting out music to buy myself.

The EP proper also came with a great little bonus release; four additional remixes - one from me plus fellow Broken20 label mates Erstlaub, Production Unit and Kwaidan. The companion release is FREE and you can pick up a copy here.

So that's the main news from me on my Nanorhythm front - I started a new Nanorhythm blog over on wordpress so you can keep up with my production adventures there.

As it's the start of the year, I figured on also throwing my hat into the ring for a 'best of 2011' roundup. Characteristically, I'm somewhat late off the mark with this as people seem to be putting lists up earlier each year - some even starting as early as November which seems rather strange to me but there you have it.

For various reasons, I didn't really buy that many 12s last year but the pick of my rather limited crop was: a smattering of Sandwell District EPs, the awesome Black Dog 'Liber Chaos' remix package, the first part of the Drexciya reissues on clone, a couple of nice things Burial was involved with ('Street Halo' and the collaboration with Four Tet & Thom Yorke), Tropic of Cancer's 'The Sorrow of Two Blooms' plus a great Digital Mystikz remix of Lee Scratch Perry's 'Like The Way You Should'.

Album-wise my favourite was probably Zomby's 'Dedication' - it has loads of great moments that really do it for me although it's definitely something to be listened to in its original context as many of the tracks are ridiculously short and the album feels like a mix in parts with tracks effortlessly flowing between one another. On the dancefloor front, Byteone's 'Symeta', Omar S' 'It Can Be Done But Only I Can Do It' plus Sandwell District's 'Feed Forward' (which actually came out very late in 2010) were all brilliant. Lucy's Wordplay For Working Bees' has some great moments and save for the guitar intro (sorry boss) I really like TVO's 'Amid the Blaze of Noon'. Kangding Ray's 'OR' is a sonic delight and finally Tropic of Cancer's 'The End Of All Things' is also very enjoyable, albeit that it doesn't really have any particular standout moment for me, unlike the awesome 'A Colour' from their Blackest Ever Black single that I mentioned earlier.

Anyhow, that's my brief roundup - no links I'm afraid as getting bogged down with such tedious admin was one of the reasons why we got bored of this blog in the first place. If you're interested enough, a quick google will soon help you track the releases down.

Bye for now and I'll hopefully be back later in the year with some more Nanorhythm news. Until then you can always drop by Cafe1001 on the second Thursday of each month to catch Langer, myself and a bunch of our mates dropping some of our favourite tunes as per the flyer Langer posted up previously.

Comments:
Very Interesting article i like it.
Thank you for sharing with us..

Very Interesting article i like it.
Thank you for sharing with us..

This mix is perfect for a dj mix tape that I'm putting together. Please let me know when you have new stuff out. I'll definitely play it.

Be sure to check out this new track whenever you get the opportunity.

Nice blog & good post. Overall you have maintained it beautifully; you must try this Free Music Promotion which really helps to increase your traffic. Hope u have a wonderful day & waiting for more new post. Keep up such nice Blogging!

Thanks for sharing.
Aşk flashları