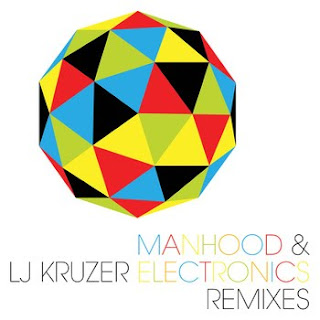 As I mentioned shortly after it's release, LJ Kruzer's Manhood & Electronics is a truly delightful slice of ambient electronics perfectly suited to a spot of horizontal listening. However, as I'm sure you've gathered by now, I also have rather a penchant for doing the techno shuffle so was excited to learn that select cuts from the LP were being given the remix treatment with the express intention being to give them a little dancefloor oomph.

The Manhood & Electronics EP comprises two remixes each of both Poil and Tam with all of the tracks coming from different producers. TVO and Trademark tackle Tam and both versions follow a similar formula whereby the original ambient melodies form the backdrop of the revised track whilst kick drums plus additional percussive and synth elements have been added to provide the danceability (as you would expect!). I've not heard any of Trademark's work before so wasn't really sure what to expect but their version is a kind of laid back tech-house affair albeit with a bit of a disco vibe - pleasant enough but not really my thing. TVO's Dead Weight mix is much more up my street - truer to the electronica vibe of the source material and steeped in atmoshperics and tension. The kick doesn't drop until the 2 minute mark and then only stays for a while coming back in every now and again for a small flutter of activity to punctuate the dense orchestral tapestry TVO has a fondness for weaving.

The remixes of Poil are handled by Cyan341 and Ukkonen and again both bring something very different to the table. Cyan's341 mix is a heads down minimal workout with little resemblance to the original version although the fact that the album version provides some of the few percussive moments of the original LP it's probably fitting that such a beat-laden version features on the remix package. Ukkonen's version makes good use of Kruzer's fondness for pianos and is more in keeping with the overall feeling of the original source material even though things are glitched up a bit here. Ukkonen is another artist I've not come across before but apparently hails from Finland and has releases due out on both Uncharted Audio and Rednetic later this year. At a shade under three and half minutes, this initial glimpse into the working's of this producer left me very hungry to hear more so we were particularly delighted when Uncharted Audio offered us another of his tracks as a blog exclusive.

Ukkonen's Tam remix doesn't form part of the official remix package but is provided here for your listening pleasure. Similar in feel to his Poil remix but with a 4/4 structure this time, this mix provides another interesting take on the original and I can only assume it missed out on inclusion on the full release by a whisker. All in all then, this remix EP is a very worthy accompaniment to the original long player and provides enjoyable dancefloor moments whilst helping to expose LJ Kruzer's music to new audiences and new environments.

The digital version is available now and the limited vinyl edition was due out this week too but has been delayed. However, the nice folk at Uncharted Audio are doing a great deal whereby if you pre-order the vinyl direct from them now, they'll give you the digital release while you're waiting for the wax to arrive - can't say fairer than that!